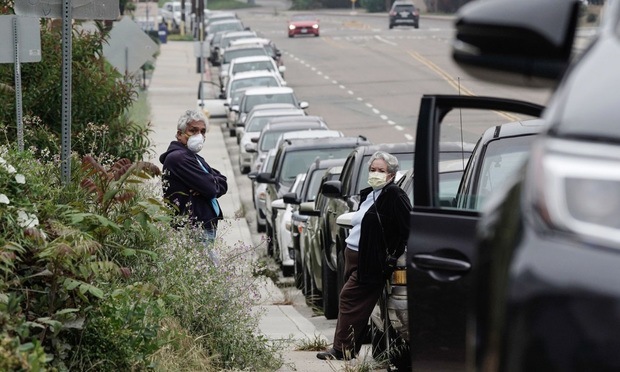 When John Steinbeck wrote his epic novel The Grapes of Wrath in 1939, he searched for a title but came up empty handed. His (first) wife, Carol Henning, suggested a line from a section of the lyrics of the Battle Hymn of the Republic:

He hath loosed the fateful lightning of His terrible swift sword

His truth is marching on.

Set during the Great Depression, Steinbeck’s searing portal of the Joad family, sharecroppers from Oklahoma evicted from their farm and who travelled to California to find work, has been viewed by some as an indictment of capitalism. Awarded the National Book Award and Pulitzer Prize for fiction, the novel is a critically important commentary on income disparities—in the 1930s and in 2020—and the economic power that the wealthy continue to possess in America.

Hollywood’s critically acclaimed 1940 film by the same name, starring Henry Ford, provided the important visual images that Steinbeck described. However, in the succeeding years Hollywood shifted its emphasis. During WWII and the 1950s (McCarthyism and the Korean War) Hollywood celebrated capitalism and the American Way, and warned of the Red communist threat.

In what can be described as adolescent patriotism in the decades since, the United States remains plagued with rising income disparity, Third World conditions in parts of the country, and a growing super rich elite whose patrolled gated compounds keep them detached—physically and morally—from the masses.

Now the planet is enmeshed in a pandemic. The Grapes of Wrath 2.0 has returned with a vengeance.

Witness the miles long, bumper-to-bumper lines of vehicles for food donations (above photo California). No, NOT in the 1930s but today in the United States. Where stressed to the max Americans ignore self-isolation and social distancing guidelines/laws because they can’t feed their families (20% of children don’t receive adequate nutrition), can’t pay their rent, can’t pay their taxes, can’t pay their employees, and choose to demonstrate in the streets and on the steps of state legislatures. (Below photo Great Depression)

This has occurred sporadically in Canada, but nowhere near on a per capita scale as the U.S. It’s not just because Canadians are more compliant than Americans, but the federal government immediately began pushing money out the door to citizens and business. It’s never enough, as the saying goes, but the aim was to address the immediate needs of Canadians. Time will tell what next fiscal steps will be needed, depending on the success of gradually re-opening the economy, which starts in mid-May in stages across the country. 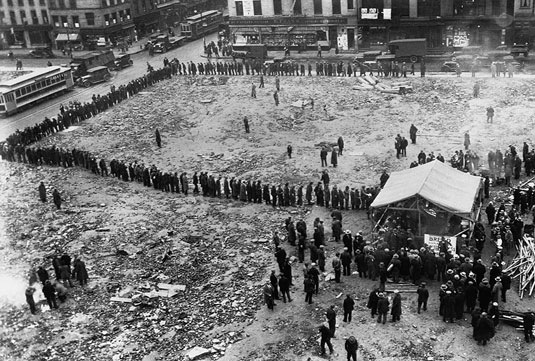 When President Roosevelt launched his Hundred Days program on March 4, 1933, he was seeking essentially two main things: a) economic recovery from the Great Depression and b) institutional reform. The great British economist John Maynard Keynes admired FDR’s resolve, although he believed that institutional reform could wait. Re-establishing consumer demand, in Keynes’ view, was more important at that moment.

As Keynes stated in a letter to FDR:

“You have made yourself the trustee for those in every country who seek to mend the evils of our condition by reasoned experiment within the framework of the existing social system. If you fail, rational change will be gravely prejudiced throughout the world, leaving orthodoxy and revolution to fight it out. But if you succeed, new and bolder methods will be tried everywhere, and we may date the first chapter of a new economic era from your accession to office.”

Fast forward to spring 2020, where a fevered pitch has reached a crescendo on Capitol Hill, spreading across a country of 337 million people, where fake news tramples on legitimate news, where a united front on combatting the Covid-19 pandemic is no-where to be found, and where a polarized population—unless glued back together—will eventually tear apart the country’s social fabric.

A uniting national force, such as a Washington, Lincoln, Roosevelt, Kennedy, or Reagan is no-where to be found. November 2020 holds little in hope. One has only to look at some other countries for current examples of uniting leadership in a corona virus world: Angela Merkel of Germany, Tsai Ing-wen of Taiwan, Sebastian Kurz of Austria, Lee Hsien Loong of Singapore, and Katerina Sakellaropoulou of Greece.

We’re likely only in the beginning of the third inning (for baseball aficionados) of the pandemic. No one on the planet, regardless of any extraordinary epidemiological forecasting powers, knows how this is going to play out and eventually conclude: from a human health perspective and an economic one. This situation amply underscores the vital need for effective, consistent, and inclusive national leadership.

They must demand it—both from their president and Congressional representatives. JT

America will never be destroyed from the outside. If we falter and lose our freedoms, it will be because we destroyed ourselves.― Abraham Lincoln

#4
How about this, Jerry: Agent Napalm, whose evil toxicity sticks to everything it touches. (I never use "President" before his name.)

#3
Jim, I call him that because because he is so toxic and I essentially refuse to use his name and never his title which he has besmirched time after time.

#2
Amen Jerry. Love the title "Agent Orange." Hadn't heard that one before.

John, the similarities are frightening. I, for one, see tough times ahead regardless of who is in the white house because agent orange has stripped the government of most of the professionals that can make a difference. It will take many months to turn around the disaster that Trump has created.And so it goes.

An interesting analogy. Maybe whoever challenges Trump to be the next PROTUS should use Americans deserve better as a slogan.