We Just Called It Winter 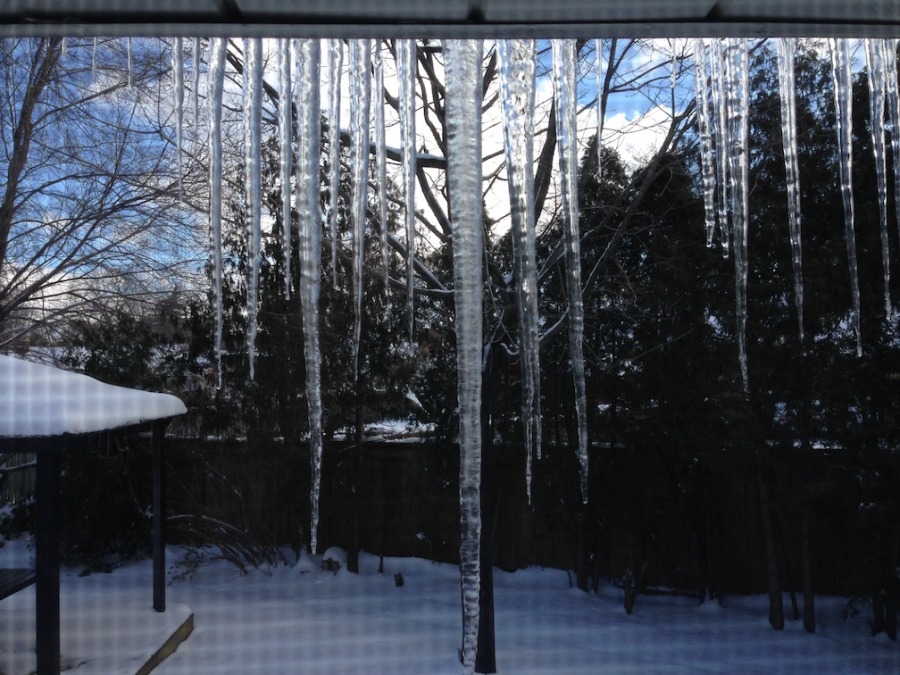 For some reason, this view out my bathroom window, with long icicles hanging down over it, made me think about winters in Fort Erie when I was a kid.

It wasn't unusual to get a foot or two of snow at a time back then,

Or for it to be replenished regularly right up until the middle of March and sometimes beyond. Today, when I look at all the millennials giving me the weather like it’s some kind of brutal event, I kinda have to chuckle.

We never thought of it as brutal. Nope, sorry, it was just plain winter.

You bundled up for it. And you shoveled it. And then you has some hot chocolate and played Monopoly and then shoveled it again.

The older people in our neighbourhood would pay me and Doug Ineson a couple of bucks for shoveling out their sidewalks and driveways. So there was money to be made from winter. The same as the money we could make from cutting their lawns in the summer.

When the snow really came down it was piled up high along the edge of a park called the Sugar Bowl. A bunch of us would gather at Larry Jackson’s house nearby and choose wooden guns that Larry’s dad had made, which were replicas of the ones he used when he fought in WW II. There were at least a dozen different shapes, and guys would argue over the submachine guns, because they allowed for the coolest sound effects.

Then we would all go to the 20 foot mounds of snow and have battles.

Nobody got hurt and there was very little association with real violence. Because we weren’t stupid, and we had all grown up with cap pistols, bb guns, air rifles and other toys like that.

Eventually, when everybody was figuratively dead, we would go back to Larry’s house and his mom would make hot chocolate.

Winters back then involved a lot of hot chocolate.

Today the toys that kids play with require a lot less imagination to connect with real world violence, and so the concerns about the effect on their brains are much greater than they were back when I was a kid when the effect on us was virtually non-existent.

I have to say that it definitely was a lot better back then, when we had to really use our imaginations and our visions were blood-splatter free.

It was a great time to be a kid back then. We had as much fun in the winter as we did in the summer. We were all rail thin and wiry because we played hard and we played long.

I don’t think about those days all that often. If I did maybe I would have become a different sort of writer. Perhaps a novelist or a real essayist.

As it is, I do believe I became what I was supposed to be, because there never has been a single day when I did not love what I was doing. And I hope I never get to see one.

but that image of those icicles, though, they really cracked open my memory bank. Who knows what else will seep out? Well I’ve got all winter to find out.

If to us winter is a wonderland of snow, icicles frosty mornings and lashings of hot chocolate, will future generations with global warming see it as BBQs surfing and cold lagers, singing Im dreaming ofa White Christmas. Somethings will never change. Whatever you do this Xmas Stay Safe. A phrase onmost of the cards I have received, no doubt echoed throughout the World.