Why I Am Optimistic About 2021 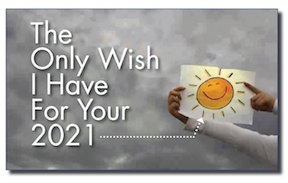 I spent pretty much this entire year getting, being and recuperating from being quite ill. It was all hellish but I came out the other side of it feeling strangely optimistic.

One of the reasons I am optimistic is due to some of the new year’s decisions I have made along the way. One is to stop attacking and or trying to reason with idiots.

There’s an old Mark Twain quote that says: “Never argue with a stupid person. They will just drag you down to their level and then beat you with experience.”

When you are constantly critical of a lot of the stupidity you see out there, it’s very easy to become so disgruntled that you could end up in a state of depression.

I am also completely worn out from worrying about Covid 19. This will be with us for a while now and all the people who know how to protect themselves until everybody is immunized will do so. The idiots who don’t, well, I just refer you to the Mark Twain quote above.

So for this year, I have decided to make a genuinely concerted effort to seek out and write about some of the things that are going on in the world that give us hope instead of fear or dismay.

One of the most interesting areas I have been doing a lot of reading about is the environment. I am finding that there are a great many new businesses starting that have at their core the notions of re-use, recycling, renewability.

Even just a decade ago these industry sectors and the businesses that comprise them would have been considered somewhere out of the fringe, toiling away in small warehouses and garages, trying their best to get off the ground.

And when they did, it was not unusual for them to be bought out by some large old school smokestack industry that made promises to them about growth that were never met.

But the times have changed, and today’s fringe industries are fast becoming tomorrows hot growth industries, because, although it’s not true everywhere, the world is starting to wake up to a few very important things:

1. That the human race can no longer afford the luxury of being populated by industries that are polluting the planet and making it unliveable.

2. That the new generation of people growing up and becoming the new mainstream consumer market are conscious of that, and making choices based on how the products, services and utilities they pay for are produced.

3. That the investment community from behemoths like Black Rock and Fidelity on down are now showing a decided funding preference for industries and businesses that are based on or at the very least making a concerted effort at environmental responsibility.

4. That with this attention and industry growth, governments are now starting to realize that supporting environmental responsibility is something that needs to be done to ensure that future generations and the economy of tomorrow can thrive.

For these reasons, and probably several others, I believe there will be a sea change in the world economy, and that the new growth industries will be built on and or provide for solid environmental responsibility.

As a writer, this area is really quite appealing. So a while ago I started a new blog called Brand New Day. It began as an excuse for me to stay busy and explore areas of business that I knew relatively little about. What it rather quickly became was a fascinating new passion.

The more I look around in this area, the more fascinating stuff I see happening all over the world.

Most of it is being done by young, well educated people who understand that unless we dramatically reduce the environmental damage we cause from making things, and reduce the amount of raw material we take from the planet, the less chance we have of surviving this century.

So here I am, nine columns into a new passion, designed to promote and support the industries and ideas that are going to save our bacon.

It’s the least I can do for the planet that has given me the good life that I have had, and hopefully will continue to have going forward into a whole bunch of Brand New Days.

Jim Murray is a writer, marketer, editorialist, reader, sports fan and TV watcher. He has been actively posting on social media since the early 2000s. Jim is also a former ad agency writer and art director and now runs a freelance enterprise called MurMarketing. He lives with his wife on the beautiful Niagara Peninsula works with a small group of companies working to make a positive difference in the world.

Jim's Blogs, including Brand New Day,  are all accessible on beBee.com

Jim Is also a Featured Contributor at Bizcatalyst 360˚

I think all we can do in 2021 is work hard to ensure we Keep Safe, and hope life can improve in a Brand New Year.