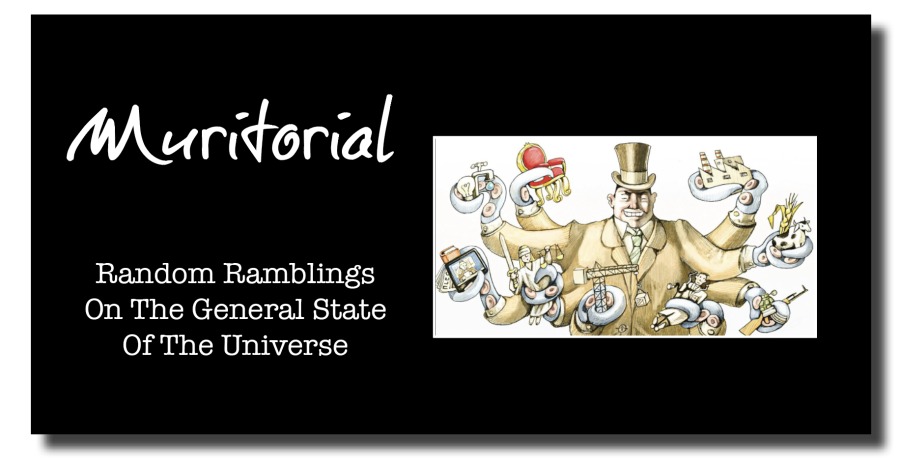 I’m pretty sure that if God exists and my belief tells me that something like God does, that entity can’t be too happy with the human race these days.

My feeling is that we have abused a lot of the gifts that have been given to us by either being too greedy or by allowing greed to flourish.

Everything that is wrong with the world right now has its root cause in greed.

The greed that finds the cheapest way to get things made, with no regard for the effect that would have on the environment and now the climate of the earth.

The greed that causes too many of the rich to hoard their money, and figure out ways to either cheat on or avoid the taxes that would be used for the common good.

The greed that causes wars and supports insurrection to plunder and protect various natural resources which the greedy need to stay rich.

The greed that corrupts politicians the world over, passing legislation or destroying laws to keep the rich and powerful protected in ways that ordinary people never are.

The greed that stratifies societies into have and have nots.

All my life I have seen this greed in action. When I was younger I didn’t really see it as a bad thing. I saw it the way many of us did, as admirable and aspirational. But the older I got, and the more I learned about the world the more I started to see that greed was nothing more than profiteering via various kinds of exploitation.

Slowly but surely I began to despise a lot of the greediest people I could see. People who flaunted their wealth and abused their privilege. People who exploited the people who worked for them and did it all in the name of unbridled capitalism. People who created amazing wealth for themselves and gave very little back. People who would rather pay a small fortune to a slick accountant than to pay their fair share of taxes on their wealth.

I also knew that there were a number of rich people and corporations who were not what you would call greedy, but who used part of their excess to create foundations, support charities and genuinely help people in need. But even these people only used a very small portion of their wealth.

I often wondered what motivates people, not so much to accumulate wealth, but to hoard it to the degree that many seem to.

After a fair bit or research the only thing that I could come up with is ego. They do it because they can. They flaunt it to prove they did it, and they hold onto it because they simply don’t want to be seen as less wealthy than they are.

There’s a great scene in a old movie called Key Largo, where Humphrey Bogart is talking to Edward G Robinson, who is a gangster who’s holding Bogey and the good guys hostage, wating for a shipment of something illegal.

Bogey is explaining that the reason Edward G. chose a life of crime is because there is one thing he wants above all else. And that thing is ‘More’. This strikes a real chord with Edward G, who can’t help but agree.

The real beauty of that scene is that it wonderfully dramatizes the hold that greed has over people. And though it’s only the product of the imagination of screenwriter Richard Brooks and playwright Maxwell Anderson, I believe it’s every bit as true now as it was back in the 1940s when Key Largo was made.

The state of imbalance in the world today, politically, morally, economically and spiritually all has to do with greed in one way or another.

The wider the divide becomes, the more the rich will continue to hoard their wealth and the more the rest will hate the rich. Needless to say it does not look good for either side, because there really are no winners in this game.

In order for human life to continue on in a healthy and productive way, the amount of greed in our species needs to be lessened and more than just a little. If that does not happen, we will soon come to a breaking point where our survival as a species will not be worth very much at all.

A hard truth about the current world.

I agree with your viewpoints Jim Murray ... There could be someone or a group of super entities who might have created/designed the universe or a part of that. It seems the super designer group has lost control over the universal system. Maybe, their design is a self-decaying system., or they are losing their superpower! The power is now with the richest 1 percent population. They are announcing the pandemic. They are announcing lockdowns. They are announcing capturing judiciary. They are purchasing the mainstream news media and social media. They are the allies of the ruling political parties. The binarization of political and business powers is showing the decay of the system, sooner or later. I would hope to see the young people would resist the decay and restore a better world. The problem is probably all the older people are not as good as you and I are. I am hopeful for restoration and rebuilding the world by the youth brigade. Cheers.

I agree with your thoughts Jim. This quote sums it up for me. As long asgreed is stronger than compassion there will be suffering. Rusty Eric. Perhaps we should be saying rather than money being the root of all evil, or rather to fully quote it the love of money, that greed is the root of all evil.